The building consisting of two-storey shophouses and a handful of modern four-storey shop/flat developments. The architecture of the shophouses reflect the wide variety of architectural styles that were prevalent in Singapore then – Late, Transitional and Art Deco styles are evident.

Due to the rubber boom from 1900 to 1930, the newly-rich started a building frenzy in a bid to show off their wealth through their new buildings. The owner’s wealth was reflected in the extent of façade ornamentation and elements of European architectural styles and features used. In addition, many of these designs also featured distinct Eastern and local influences. A row of 11 beautifully tiled and plastered Art Deco style shophouses at 161 Lavender Street was originally the premises of the Lee Rubber Company and owned by Lee Kong Chian. Lee was a supporter of Dr Sun Yat Sen’s Nationalist cause and this explains the plaster reliefs of soldiers carrying the Nationalist flag of the Republic of China on one corner façade pediment. This project won a URA Architectural Heritage Award in 1995 and demonstrates the sensitive integration of a new 4-storey rear extension – Nestled within the Jalan Besar Heritage Trail 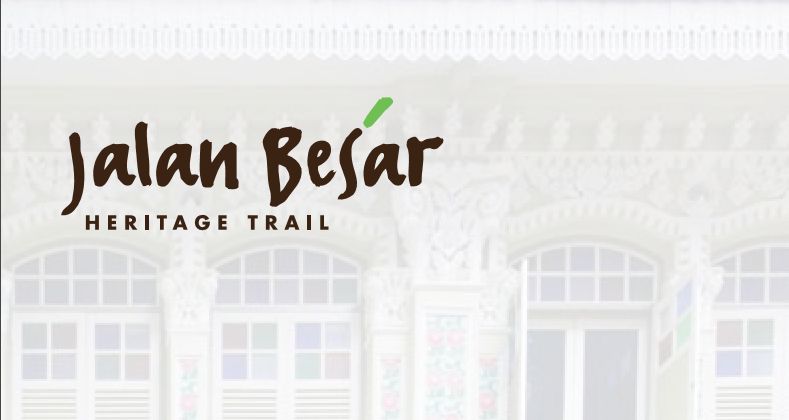 The Jalan Besar Heritage Trail is a tale of two former swamps. First, we trace the urban development of a ﬂoodplain that once existed on the north bank of the Rochor River. Next, we chart the stories of the communities and cultures that sprung up around the muddy basin of Singapore’s longest waterway, the Kallang River.

The remnant swampland around Jalan Besar and the tidal ﬂats of the Kallang Basin have long been reclaimed. Shophouses, temples and churches now occupy land once overgrown by mangrove trees and nipah palms. Farmland has given way to schools, hospitals and a stadium. And once bustling villages sustained by coastal trade have vanished as industries, housing developments and parkland emerged to add a new dimension to life on the eastern reaches of the Lion City.

Gone too, but certainly not forgotten, are New World and its gaudy host of performers who sang, danced and performed for citizens in an era when live entertainment was the only form of recreation in town. In between sets, the audience probably sipped soft drinks brewed and bottled by beverage factories located in the neighbourhood, which are, similarly, a mere memory today. Little missed, however, are the less pleasant elements of the area: the cattle and pig slaughterhouses, municipal refuse facilities, sawmills, oil mills, rubber factories and brick kilns that once polluted the rivers and almost certainly overpowered the senses of those who wandered too close.

An Honour To Have President of Singapore @ Our Shop

Local Flavour For A Taste Of Love.