What It Means To Receive Flowers – From A Girl’s Perspective Most girls love receiving flowers. Be it the thought behind the action or the sheer beauty of the bouquet, it’ll definitely put a smile on her face. Sending a bouquet of flowers to someone is a sign to show that you care about her and that she’s constantly on your mind.

Here at 24HrsCityFlorist.com, we believe in helping others make their loved ones feel treasured and making their day special. Are you sending flowers on an important occasion such as a birthday or anniversary, or even just on a normal day? Be sure to make your next flower delivery count and impress your special someone. For those who are clueless about how a girl REALLY feels when receiving flowers, we asked real girls to share their thoughts and experiences below. 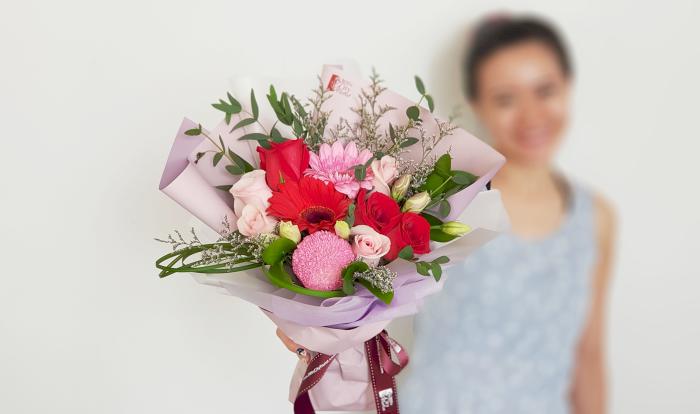 Actions speak louder than words. And that saying is definitely true to girls. In modern society, it is normal to be there for someone 24/7 via text or even through a phone call. But what really touches someone’s heart would be the personal touch and by going above and beyond to show that they care. Sending a beautiful bouquet or even giving someone a simple bunch of flowers, means far more than just sending across a heart of flower emoji through WhatsApp. Regardless of their age, receiving flowers is bound to make your girlfriend, friend, mother, or even your sister smile.

One of the most common misconceptions is that guys should only give flowers to girls on special occasions such as Valentine’s day, birthdays, anniversaries and graduation. The truth, according to us girls (or at least me), is that flowers shouldn’t only be given out of obligation and there need not be a reason to send flowers. Flowers are well-known to be a universal symbol of romance and appreciation. So why only spread joy and show someone you appreciate them on a specific date, why not surprise them on a random day that they’d least expect it? There’s nothing more gratifying than seeing your loved one who’s having a bad day turn her frown upside down just by receiving a flower bouquet that you had picked out.

We rounded up a list of the people that girls most commonly receive flowers from:

The most common of all, many girls receive flowers from their boyfriends. Some girls receive flowers only on special occasions such as anniversaries, whereas some others receive bouquets from time to time for no reason. It largely depends on the guy’s personality but our tip? (Guys: sending flowers on no-reason days make the best surprises)

Shariel, 25, shared her lovely experience of receiving flowers from her boyfriend. “Personally, I love flowers, be it fresh flowers or preserved or dried flowers! They are so beautiful and it is such a pleasant feeling just looking at them and admiring its beauty. I have received flowers from my boyfriend on a few occasions. I enjoy good old-fashioned dating where your boy still shows up at your door with a bouquet of flowers, especially during special occasions. Of course, a guy should still surprise a girl once in awhile even on days when it is not a special occasion. I was super touched when my boyfriend turned up at my place with a bouquet on a random day. It was not a special occasion that day but he did, and the reason he gave was because he had not gotten me flowers in awhile and he knows I love them. He also never fails to pick out my favourite flowers in the shade of colours I love. I think that shows how much effort he puts into remembering the things you love, and gets them just to make your day.”

Likewise, Jolene*, 24, said that she had previously received flowers from her boyfriend before they officially got together and she was pleasantly surprised and happy. 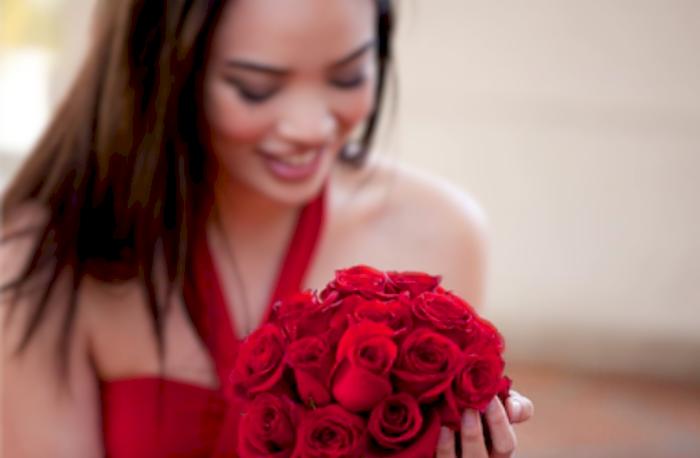 Of course, there’s a wide variety of flowers that guys can get for their girlfriends. Unsurprisingly, roses which are a symbol for declaring passionate love, is the top choice. Roses and romance are classic and go hand-in-hand. However, there are tons of other choices which would make your girlfriend swoon over too.

It’s heart-warming to receive flowers from friends too! Flowers are such a universal gift that it’s fine for female friends to give their friends of the same gender flowers without any misunderstandings. On the other hand, girls tend to think that single guy friends who send flowers to them are interested in them. Nonetheless, flowers make great gifts to bring for friends’ graduation ceremonies, birthday parties or just as a way to cheer the person up. Rachel*, 20, shared her experience of receiving flowers from friends. “I received flowers from my friends on my birthday and I was really surprised and touched. They chose a bunch of colourful flowers which really brightened up my day and made me think of them whenever I saw the flowers. I was also from an all-girls school for 10 years so we used to give flowers to our friends during special occasions such as Valentine’s Day. It’s perfectly normal to exchange flowers with friends of the same gender because everyone ends up smiling in the end! Even a single stalk can make someone happy.”

Liz, 23, received flowers from her friends during her graduation ceremony. “I was so surprised to see my friends waiting for me with a bouquet of flowers! I loved how they put in the effort to make a trip to the florist and get the flowers even before the ceremony because I know how busy they are!”

However, not every girl feels the same way about receiving flowers from friends. Some might feel that flowers are expensive and might worry about their friends forking out large sums just to buy a bouquet that might not last long. However, despite their concerns, it would not lessen the joy they feel upon receiving the gorgeous blooms.

Nothing says “I appreciate you” better than a well curated bouquet of flowers. Regardless of their age, mothers, grandmothers, sisters and aunties alike, are aware of the effort and sincerity behind a bouquet of flowers. For women in the family, flowers are usually received during occasions such as birthdays or on Mother’s Day.

Annie*,59, a mother of two, often receives flowers from her two children on Mother’s Day yearly. “My kids don’t really know what to get me but they know I enjoy looking at flowers. It’s quite a sweet gesture for them to send the bouquets to my office!”

Joanne*, 21, received flowers from her aunty on her birthday. “For my 21st this year, I was so happy to receive a huge bouquet of roses from my aunty! It was delivered during my birthday party and all my friends thought that it was from a secret admirer haha. I really appreciated it because she knows I love roses. It was also nice that she wrote a touching note which came with it…I kept the note!” 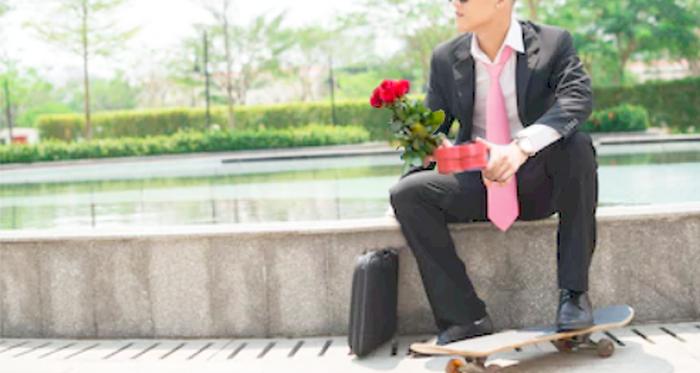 Similar to receiving flowers from their guy friends, girls might misinterpret their male colleagues giving them flowers as a romantic confession. Workplace dynamics are often complicated and what’s more with a male colleague’s mixed signal of sending flowers.

Can girls perceive receiving flowers from their male colleagues as just a gift though?
Shermaine*, 30, said that she thought it would be awkward if a male colleague gave her flowers because it might affect their working relationship in the future. To her, if the male colleague only sees the girl as a normal colleague and nothing more, he could give her another gift that might be less romantic. She said that she had a male colleague leave her a bouquet of flowers on her office table once and after she confronted him, he confessed that it was to ask her out on a date. Sadly, she didn’t fancy him and it turned out awkward in the end but “the flowers were nice though!”

Receiving flowers from an ex-boyfriend can be a tricky thing. Seeing as how the relationship had ended, receiving a bouquet could come across as confusing to the girl. More often than not, the flowers could mean one thing – a plea for forgiveness and a second chance.

“Weird” and “Creepy” are two adjectives used to describe the potential feeling some girls feel should a friend’s friend or stranger send them flowers. Though flowers are versatile gifts, the act of sending a girl flowers is intimate in nature and suggests some sort of pre-existing relationship between the sender and recipient.

Bernice*, 28, shared her honest opinion below – “If it’s just a stalk and a pretty flower, I will feel it’s a nice gesture. If it’s a whole bouquet, then I’ll feel weirded out. Unless it’s chocolates or a nice beverage then it’s okay!”

However, the situation would be different should it be a charity event or roadshow that passes out flowers to strangers walking by. In that case, receiving a stalk of flower would have no hidden meaning as it’s given out in general.

Personally, as a 25-year-old girl who loves flowers, I feel that you can’t go wrong with sending flowers to girls (unless you’re a total stranger). Having received bouquets for birthdays, graduation, random days and during dates, the joy of receiving flowers is truly immeasurable. To me, the fact that someone had taken time out of his/her schedule to purchase flowers for you also means that the person is thinking of you. It not only brightens up your day just by looking at it, but is a constant reminder of how loved and appreciated you are by others. As someone who has a soft spot for romantic gestures, flowers are also the best way to express your interest in a girl that you like as it shows how thoughtful you can be. While the flowers itself are pleasing to the eye, the thought behind the bouquet warms one’s heart.

Who do girls REALLY want to receive flowers from?

To keep it real, I conducted a poll on Instagram to find out who many of my girl friends would like to receive flowers from and some of the replies were seen below.

Interesting enough, one girl said that it would be nice receiving flowers from anyone but the real game changer would be the content of the note they attach.

Notes attached to bouquets are often kept short as it usually just a one-liner message and the sender’s name. Sending flowers is a sweet gesture but what would make the gesture even more memorable would be the content of the attached note. Flowers may be ephemeral but the feeling you get from receiving them does not fade away. Nor does the note that you would be able to keep even after the flowers wither.

Do all girls really feel happy after receiving flowers?

You might be questioning if it is really true that girls feel happy while after receiving flowers. Well, according to a series of studies performed by two professors at Rutgers University which took a look at people’s reactions upon receiving flowers, they found that flowers elicited true happiness in 100% of the people who received them.

We hope that that’s motivation enough for you to send a bouquet of flowers to a special girl in your life today (your girlfriend, friend, family member…etc). If you’re at a loss on how to pick the perfect bouquet for that special girl, you can rely on an established and professional florist to help save the day and bring a smile to her face. Don’t forget to put some thought into your selection by choosing flowers and colours that she likes!

*Some names in the article were changed due to privacy issues.

How To Wrap A Gerbera Bouquet