What Flowers and Colours are Typically Suited for Funerals

November 11, 2021 / Admin / Comments Off on What Flowers and Colours are Typically Suited for Funerals

Traditions have been the pillar of people’s cultures around the world since time immemorial. These customs and beliefs, passed from one generation to another, have been here to guide us in our waking life. Though, beliefs and traditions differ from one culture to another, there are some certain practices that are widely observed despite differences; one of these is funerals.

END_OF_DOCUMENT_TOKEN_TO_BE_REPLACED

It was 11 years ago; 11 years ago when I first gave a condolence flower to a friend. My friend was just 13 years old and she was lying in the coffin while I stood there, not wanting to believe what was before me.

Till this day, I still hold vivid memories of Daisy who passed away back in 2009. I was 13 then, and as a young teenager, my mind just could not comprehend what had just happened. I had pontang (pretended to be sick to miss school) school that day, when about 2.30pm after school hours I received a phone call from a school mate I was never really close to. It was odd. The moment I picked up the call, all I could hear was my friend crying as she struggled to tell me that Daisy had died. “What do you mean Daisy died?”, I asked, simply completely confounded. She just kept repeating, through her tears, that Daisy had died and that I should come to school now. As I lived just opposite the school, I ran as fast as I could and reached pretty soon. It was then that the school had gathered all students in our cohort to announce the death of my dear friend, Daisy. I was extremely shocked, and at the same overwhelmed by this sense of unbearable heaviness. There were so many words unspoken, there were so many regrets that I had.

END_OF_DOCUMENT_TOKEN_TO_BE_REPLACED

Expressing Sympathy To The Family Of The Decease in Singapore

When a loved one is no longer with us, finding the right words to comfort someone grieving is always difficult and can make the most articulate of us feel tongue-tied. It often feels like an obstacle course of etiquette and taste. Most of us feel that even the most heartfelt condolence messages may be inadequate and superfluous. But we should keep in mind that while there is nothing you can do to take their pain away or be enough to cheer up a grieving friend of family member, careless words could hurt them further.

Sending condolence flowers or flower wreaths is a great way to let the recipient know that you are keeping them in your thoughts. Condolence and funeral floral stands also help to honor and celebrate the life of those who have passed, and would be much appreciated by the family. While there are no hard and fast rules as to what types of flowers to send in sympathy, there are certainly many traditional favorites and those that are favored for their muted colors and formality. Some flowers may symbolize certain emotions or facilitate expression. Individual flowers also communicate slightly different meanings. There are a few florists in Singapore offering 24 hours condolences flower delivery.

END_OF_DOCUMENT_TOKEN_TO_BE_REPLACED

February 10, 2018 / Admin / Comments Off on Wreath Delivery In Singapore

Types of flowers to send for condolence

END_OF_DOCUMENT_TOKEN_TO_BE_REPLACED 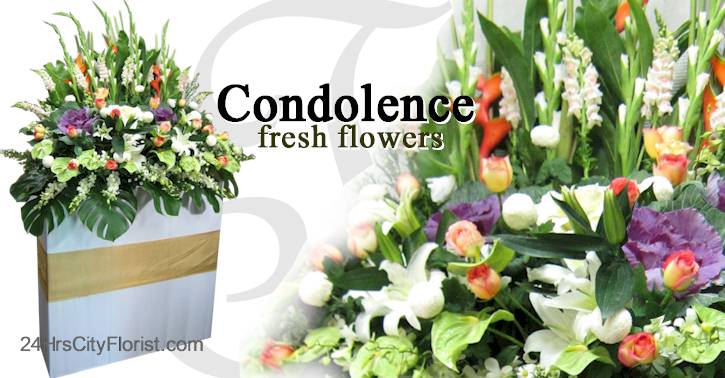 Conveying your condolences can expressed by sending condolence flower stand to the family’s wake. Traditionally the wake is held either at the home, church, funeral home or parlour. A traditional idea is to send a fresh flowers to the family of the deceased. Sending condolences flowers for sympathy is not limited to just friends and family of the deceased – co workers and business acquaintances may want to express their support for the family as well. Choosing the appropriate gift will show your support in a subtle and warmhearted way. An arrangement of white and green often the most neutral and universal combination of colours for condolences flowers.